Hold the fat lady! In Victoria the season ain’t over till it’s over (or started till it’s started, but that’s another story). If you’ve got the apptitude and the attitude, some fitness, and at least a K-Mart tent, mighty Mt Bogong kicks on long after the lifts stop spinning. Sam Leitch checked it out, Sarah Black took the photos. 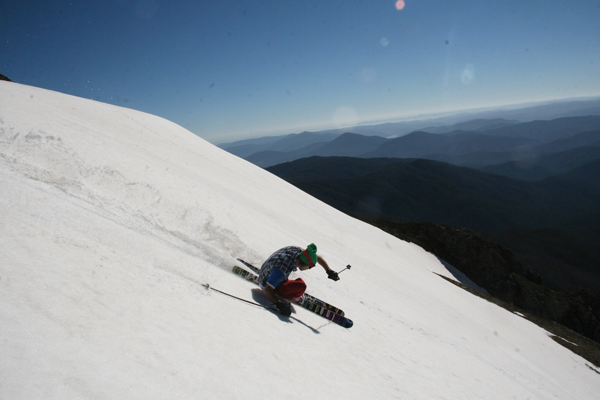 Season 2013 was frustrating. A lot of our storms at Hotham finished with rain and therefore the backcountry had a lot of weak layers and weird conditions. Spring came fast. Only Victoria’s biggest mountains had snow by October. Mt Bogong, at 1986 metres, is Victoria’s king and reputed to have big east facing gullies. So in early October I tried to find a companion for a journey. But my friends were sceptical.

“You are tripping Sam, there will be NO snow!” Perhaps they were right. You can’t see the east face from the approaching Kiewa valley. But sexy sister queen mountain Feathertop still had snow in her foxy east face. I waited for an extensive clear forecast. Buff said that Bogong was deadly in bad weather, and not somewhere you could exit in a hurry. And my tent was from K Mart.
Day One: Monday 7th October.
I talked open minded snowboarder Sara Black into getting on board as trip photographer and we hit the road. Rolling into Mt Beauty at lunch we got a long anticipated view of big bad Bogong with, of course, NO snow. I grabbed some trail notes and a map from the info centre. The map had “not for navigational purposes” written in the corner. Sara looked doubtful.
Later that afternoon we parked at the gorgeous camping area at the base of Staircase Spur at 600m altitude. It was hot, luscious, pollinated and green. The hazy brown summit lay 8km and 1400m above. At sunset we staggered into the camping area at Bivouac Hut, about two thirds of the way up. The night was still, mild and filled with (bogong!) moths. We’re tired but digging it.
Day Two: Tuesday 9th October.
Finishing our warm ascent the next morning we passed through the treeline to the exposed alpine. The weather and visibility was perfect. The big old Main Range lay in the distant north east sparkling with snow. A memorial marked the death of three climbers during a blizzard in August 1943. I thought how bleak this place would be in a low visibility blizzard back then. The baking, snowless west face we were ascending had rad terrain and ghecko lizards on the rocks.
We hit the summit at lunch and it was the moment of truth. I dumped my pack and ran over the grass to southeast facing Cairn Gully.
An older guy with lightweight touring skis looked at me in surprise as I stared around panting for breath. Cairn Gully had a fun cornice and held corn snow in a wide, nicely pitched bowl that got steeper on skier’s right. I was pretty much ecstatic to see any snow at all. Touring Guy told me about another steep bowl further on to the north. He said it hoarded snow to 500 metres down, which sounded unlikely. He then dropped in and linked some slow, graceful telemark turns out of sight.
We threw the tent up right there on the summit next to the navigational pole marking the track in case the weather turned. We built a small kicker in Cairn Gully and had a fun afternoon throwing little airs over the cornice. Afterwards we decided to explore shred options for tomorrow. Dubious about Touring Guy’s mystery bowl, we decided to walk to the west peak three kilometres away. On the way we noted some east faces holding the remnants of a receding snowpack, with solid cliffs and big terrain. My mind was spinning as I tried to mentally note aspects and features and speculated on skiing this area in winter.
From the west peak the green Kiewa valley stretched to the west; to the south was Feathertop and Hotham. Mt Beauty lay far below. We were feeling the magic Bogong vibes. The late afternoon sun was warm, and we slept on the grass.
That evening at our camp high cloud blew in and enveloped us in fog. The vibe suddenly felt creepy. This was not forecast, but you know mountain weather is volatile in Spring etc.
I worried that the cool change due at the end of the week had come early. So we drank some port and went to bed.
Day Three:
Wednesday 10th October.
I woke in the pre-dawn and went outside for a slash. The stars seared in a cloudless sky and the eastern horizon was turning pink. I felt alert and decided to walk over and check out Touring Guy’s mystery bowl. I headed north towards the signified rollover, not expecting much. I looked down in surprise at a wide snowfield that narrowed into a steep couloir that held snow for a long way down. Jackpot baby!
I spent the morning skiing and bootpacking up while Sara took some shots. The snow had frozen overnight but by 8.30 the sun had softened it to creamy and dreamy consistent corn. The skiing was crazy fun, the views were new and the sun was damn hot.
By early afternoon I was thrashed. Sara swapped the camera for the board and laid some tracks in Cairn Gully. Fortunately for us athletic Hotham telemark skier Paul Fitzgerald had decided to stroll up and join us, by way of an obscure logging track.
He is a smart dude and we were glad to see a person who actually had a clue. Best of all, the route down to his car was half the distance of ours! He would guide us down on the condition I kept it on the low down. What a guy. It was 20° degrees when we got to Paul’s car, and we were sweating, sunburnt and wobbly.
Postcript: Melbourne, Thursday 11th October.
On reflection we were lucky to get some nice turns. Fortunately the snow was soft and not icy. And we were able to camp right there on the grassy summit in a crappy tent. In retrospect a winter mission to Bogong could be amazing, but would require a higher level of preparation and equipment. You would probably need to stay in luxurious Cleve Cole hut a few kilometres to the side of the summit. But if you don’t mind humping a heavy pack up, and you have AT bindings, teles or a split board, then Bogong offers a lonely and challenging freeride venue. 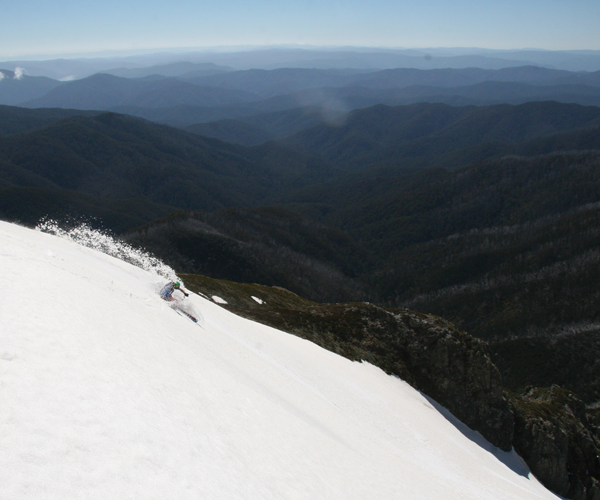